Which Finger and Hand You should Wear Wedding Ring? Infographics 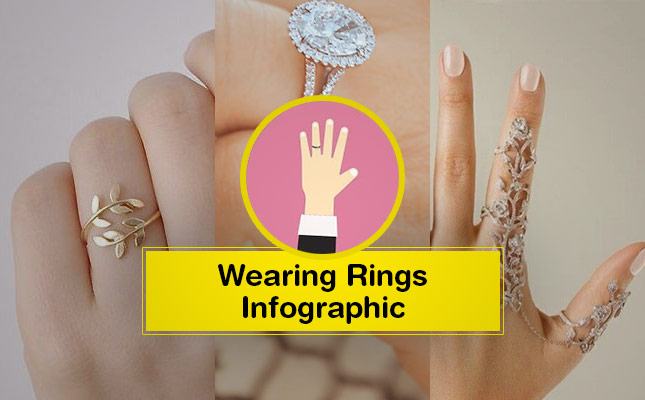 Have you ever wondered why you wear your wedding ring on a particular hand? Is it something to do with tradition or there is a scientific reason behind it. People in some countries wear it on their right hand while in some wear it on their left hand. Does such thing ever intrigue you? It is always interesting to look behind reasons for all these small facts.

Reason for Why Wedding ring on Left Hand

To begin with, most of the people in Asian countries and some of the European countries wear their wedding bands on the left hand. But, in countries like India, wedding ring on left hand is avoided as left hand is regarded as impure.

In both Germany and Netherlands, couples first don golden engagement rings on their left hand fingers. Once they get married the rings change hands that depict status change.

This trend of wearing wedding rings on left hand began during start of 18th century.

Countries where couples where wedding rings on the left hand

Reason for Why Wedding ring on Right Hand

The ancient Romans and Egyptians wore wedding ring on right hand as left hand was deemed unreliable and unhappy. In countries such as Lebanon, Syria, Turkey and Brazil before the wedding, the  ring is worn on  right hand and after wedding is solemnized it is put on the left.

Why the ring is worn on the ring finger?

The ancient Romans and Egyptians had this belief that nerve or the vein from the ring finger goes directly to the heart. This vein was called “the vein of love” and in case the ring was not put on this finger, this meant that your heart is already taken by someone else.

According to the Chinese theory, place your both hands together and blend the middle finger together leaving other finger’s tip touching each other perfectly. Then try to separate each fingers and you will find you can not separate the ring finger which represents the relation of husband and wife.

Countries where couples where wedding rings on the right hand

Wedding rings are basically a symbol of love and affection. There can be no law which governs where they need to be worn.  So, at end of the day the choice is entirely yours!